During the operation of printing machines the mechanical vibration, mostly flexural vibrations, of their structure and machine parts is induced, which might lead to significant disturbances in a building, according to the location, e.g. on a certain floor. The most disturbing part is the structure-borne noise. The expression structure-borne noise is used when mechanical vibrations lead - as a secondary effect - to the emission of airborne noise which is then audible for people. The expansion of structure-borne noise in buildings is one of the most difficult chapters of the building acoustics. A building consists of many building components, which are assembled in a plate- and bar-shaped way. When solid objects are stimulated, bending waves are produced first, as they are the easiest ones to be induced ("great" flexibility, vertical to the plate). In case of bending waves, the biggest deflections usually occur at the surface, thus leading to a great acoustic energy flow into the coupled air.

As multi-colour printing machines consist of many units, which have to be adjusted exactly to each other, a vibration and structure-borne noise insulation puts especially high demands among others on the levelling stability of vibration insulation systems.

Severe disorders due to vibrations and structure-borne noise on the upper floor caused by the Heidelberger SM 52 Four-Colour Printing Machine, set up in the cellar. Direct installation on Vibration Insulation Packs HD-IJ. 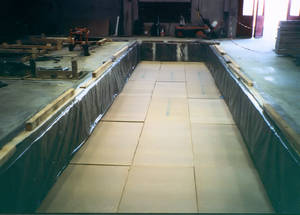